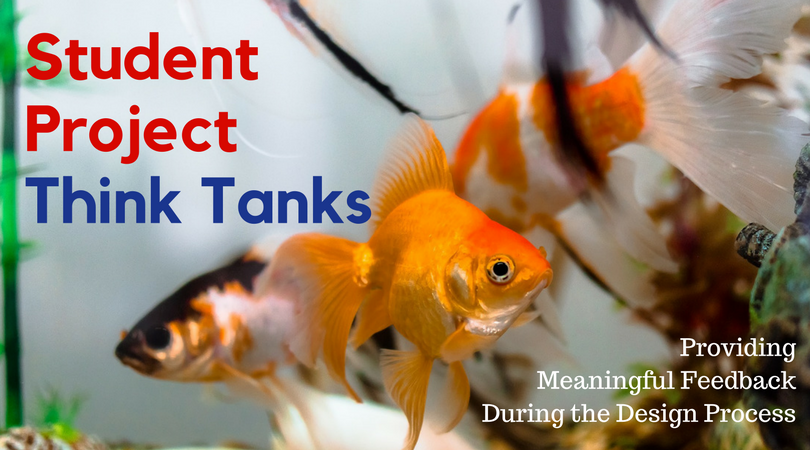 We all know the benefit of surrounding ourselves with others whom we can ask for advice. I’m fortunate to work with a bunch of English teachers who are terrific sounding boards for ideas. But it’s also good to take advantage of those who don’t work in my building. I’ve been a part of mastermind groups who meet online. I’m part of a few Facebook groups for specific courses that are a wealth of great ideas.

Often when students are working on final projects they could benefit from some outside help. For example, my students are currently working on assessments that they have designed themselves. Some are doing their final project on social media, some are doing a website, some are doing podcasts or videos. One is writing songs for a musical. And I even have someone doing an interpretive dance. They could all use some advice and guidance not only from me, but also from their peers. And if they choose their groups, they are likely to pick partners that work and think in the same way. This makes for a good work environment, but a broad base of knowledge can be sacrificed. Those who are making videos for the first time, for instance, could benefit from the guidance of someone who does it as a hobby, and that student may not be in their group.

Here’s where the idea of the think tank comes in. The think tank gives students the opportunity to collaborate meaningfully throughout the design process. Every week students meet with others in the class and present problems that they are having. If they are working in groups, they have to join a think tank without anyone else from that group. I like groups of around six or seven. Too small and you don’t get a whole lot of ideas. Too big and some people won’t participate.

They then go around the circle and share their issues to get some meaningful feedback. I instruct them that part of their responsibility is to get help from others (which is an obvious benefit) but they are also to provide help and suggestions themselves. We allocate a decent amount of the period doing this because I expect them to take their time and thoughtfully respond.

We always do the think tank on Thursdays. Because they know this ahead of time, they can generate questions during the week. They need to show me their list of questions before the end of the period on Wednesday. Some have a few questions, some have only one. And that’s okay. Everyone is at different stages with their project.

I tell them that they can ask questions in order to problem solve, but they can also use it for market research. For example, a student who is creating a podcast can ask the think tank how long of a podcast they would actually listen to. Someone who is doing their final project on Instagram or Twitter as a social media feed can show them their feed and ask what would make it more interesting or gather more followers.

As this is happening I’ll circulate around the room and make sure things are progressing smoothly. It’s tempting to give them advice myself and while I do engage them in conversation about what they are doing, this is one time where I stay out of it.

Because I can’t hear what everyone is contributing, I have each student do an exit slip about one problem they had that was solved within the think tank.

Here are some problems that were presented in a recent think tank and the solutions that came out of it.

The think tank is effective, but only if you start working on the final project while you are reading the novel. I’m moving beyond the instructional method in which we read something and then do the project after we’re finished reading. I want my students to start working on the project right away. Not only does this new method allow for more in-depth projects because you have five weeks to work on it instead of a few days at the end, it also allows students to fully engage in the design process: seeking out ideas, trying out prototypes, thinking deeply about audience, and gathering feedback like the think tank along the way.

I’ve Been Thinking About Design Thinking

Getting Started with Student Designed Assessments in ELA