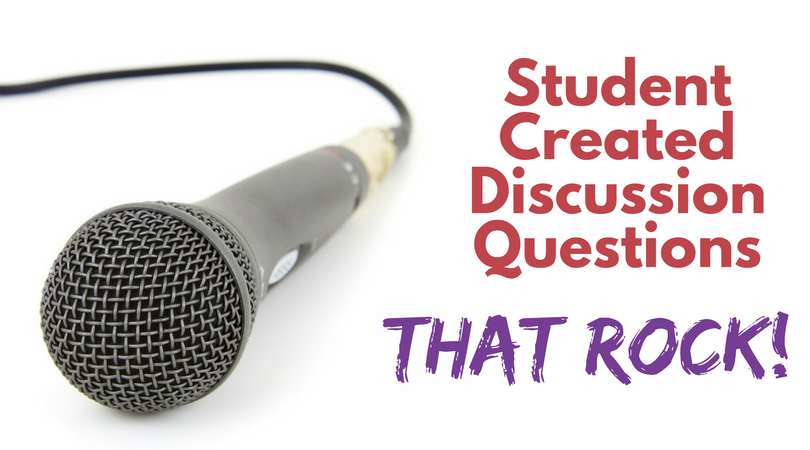 Nothing is worse than the sound of crickets in a classroom when you are trying to lead a discussion. This was the situation I faced last year with a couple of my classes. I created thought provoking discussion questions, asked them of the whole class, and was met with silence.

As a result I decided my students needed ownership of the process. Why was I spending time coming up with the discussion questions? And why couldn’t they lead the discussions themselves?

But before I tried to solve this problem, I had to think of my “why.” Why was it important to have students generate their own discussion questions? At a basic level I wanted them to engage with the text. But I also believed that creating discussion questions was a valuable skill. As I wrote in a previous post a goal I had this year was for my students to develop the habit of coming to class prepared with something to contribute. I also believe this will be a valuable skill in college. Those who are actively engaged in learning are better thinkers, and having students craft their own discussion questions is one way to get there.

Fortunately I found a solution in a helpful book called The Pocket Instructor: Literature: 101 Exercises for the College Classroom. The activity is called “Put the Question” and it was developed by Chris Baratta.

The breakthrough development is that according to this activity, each student’s discussion question must be at least 200 words long.This is much longer than what my students had done in the past. You should have seen their faces when I told them this.

My students had no clue how to make a discussion question that long. However, I had an example to show them from the textbook as an example. Here are a couple that my students wrote about Pride and Prejudice, and I would start off by showing students an example and asking them to discuss why it was an effective question:

At the end of chapter 11 in Pride and Prejudice, there is a quote from Mr. Darcy that really grabbed my interest. Mr. Darcy says; “I cannot forget the follies and vices of others so soon as I ought, nor their offenses against myself. My feelings are not puffed about with every attempt to move them. My temper would perhaps be call resentful. My good opinion once lost is lost for ever” (58). Although we know that Mr. Darcy is extremely judgmental, in this quote he is openly admitting to his fault. What caused Darcy to become so resentful and hold such incredible grudges? Was it something that happened in his childhood or earlier life or is it simply just his status and the combination of pride and vanity? Along with this, we can also tell more of Darcy’s hostile personality by his first impression of Elizabeth. Upon meeting Elizabeth, Mr. Darcy was very judgmental and refused to dance with Elizabeth claiming she was “not handsome enough”. As the story progresses he begins to have feelings for Elizabeth but tries to push them aside based on the fact that her status may not be ideal for him. In the quote that I presented earlier, Mr. Darcy says once his “good opinion” is lost, it is “lost forever” (58). He kind of goes against what he said though, considering at first he wanted nothing to do with Elizabeth but now he is gaining feelings for her that are completely different from his initial negative opinion of her. What does Darcy base his opinions of other people by? What are other examples (if there are any) of him changing up his opinions of people?

“Pride and Prejudice” by Jane Austen opens with the following iconic sentence: “It is a truth universally acknowledged, that a single man in possession of a good fortune, must be in want of a wife.” This ironic sentence describes general attitude towards marriage in England at the times when the novel was written (Late 19th century) and “sets” the basic central plot of “Pride and Prejudice.” How true is Austen’s statement so far in the novel? More specifically, do you think that the two main bachelors are in a rush or hurry to urgently find a wife? If so, do you think that they are actually more pressured by either their high social status or the bachelorettes than their own needs to marry someone? Basically, if both Mr. Bingley and Darcy were in the modern world, do you think they would even want to marry at this time? This whole time during the novel, it is mainly the women in the novel (Mrs.Bennet and Miss Bingley for example) that are scheming and creating ruses in attempts to woo Mr. Darcy and Bingley for them or for their daughter, while the both of the bachelors are casually allowing all their plans to fall in place, is this evidence that both of them are lacking motivation?

Why Do These Work?

The biggest reason why is they provide context. We know exactly where the students were in the book when they were thinking about the question they posed. Direct quotes are a great way to give the other students a foundation from which to discuss something.

Second, there are multiple points of entry. There are a couple different questions being asked, but they all follow the same line of thought.

Consider the alternatives if I had just told them to create a couple of discussion questions and come to class prepared to discuss them. I might have had questions like this:

Why is Darcy so judgmental?

Why is the first sentence ironic?

What do the men in the novel think of marriage?

All good questions, but requiring a longer response afforded them the opportunity to think more deeply about the question.

How The Discussion Looked in Class

I had students submit their discussion questions electronically the day before by 6 o’clock so I had time to look over them before the next day’s discussion. I gave a bit of feedback if I thought of something else they could address that fit naturally with what they had done.

I broke them into groups of four and had them engage in conversation about their discussion questions. We spent twenty minutes- I wanted to make sure they didn’t run out of steam, but got to everyone. Of course there was some overlap between questions, so I told them they didn’t have to go question by question if something they had in their question worked naturally with something someone else asked.

I also told them not to read their questions word for word, but just give a summary. I was positive that I couldn’t listen to a 200 word question and remember it, so I was sure they couldn’t either.

As they did this I circulated the room, hopping into conversations and answering questions if needed.

After the discussion was over, I wanted them to reflect back on the effectiveness of their questions so they could improve them for the next time. I’m big on reflection this year, and I wanted them to consider what worked with their question and what they could do better the next time to foster conversation. They submitted this through a comment on the question they submitted.

The best part about this activity is that it’s one you can do every other week and never wear it out. In fact, I’ve decided I haven’t been doing it as much as I should be. The conversations that my students had were rich and deep. And for once I wasn’t standing up in front of the room awkwardly waiting for a students to answer a question that I created.

Looking for more creative assignments? Check out the posts below.

The Hat Project: A Great Project for the End of a Short Story Unit

Alternatives to the Essay: Infographics