Have Your Students Create Their Own Essay Prompts 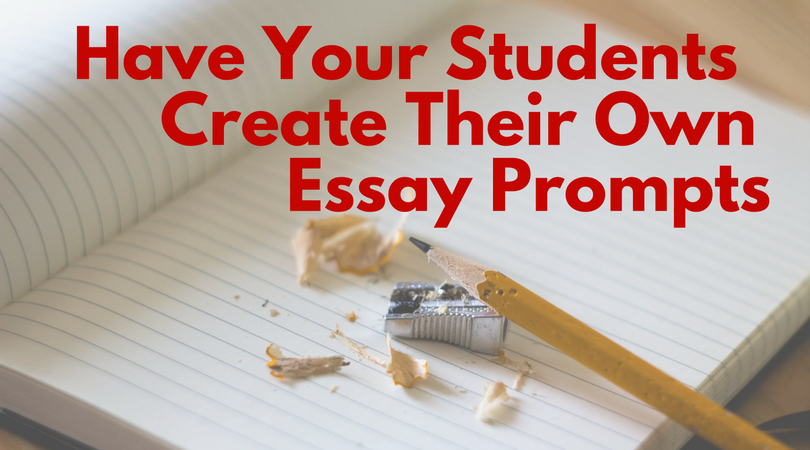 Sometimes the best lessons come not from great planning and preparation, but out of desperation and necessity. I had my students create their own essays prompts, and it definitely came from a spot where I felt like my back was up against the wall. However it was one of those fortunate events that created an engaging learning opportunity in my classroom.

I wanted my students to write an essay once they finished Wuthering Heights. However, I didn’t have any good prompts – I have only taught it for a couple of years, and both of those years I just used some prompts from Q3 on the AP Lit test and did a timed writing instead. However, last year I definitely didn’t assign enough essays, so I went in search of some suitable prompts with no luck. I thought about using some from my Center For Learning book, but those didn’t really grab me and I didn’t think the students would be all that inspired either.

I began to wonder if my students could create their own prompts based on what they wanted to write about. It sounded like a great idea, and given the caliber of the students I had this year I thought they could pull it off. The worst thing that could happen would be that I didn’t get any usable prompts and we had just wasted a class period. It seemed worth the risk.

How I Set It Up

The plan was that each class would create a set of questions that the class could choose from. They worked in groups or individually to come up with questions. I knew that I needed to give them parameters to work from, so I pulled some of the reading and writing standards from the state and told them that their essay needed to allow them to demonstrate the ability to perform those skills (W.11-12 to be exact.)

I also provided this link to model what good prompts looked like and a link to Bloom’s Taxonomy to give them some ideas of words they could use in their prompt to encourage higher level thinking. As it turns out, they didn’t need to use either; they assured me that they had written on several essay prompts before and knew what they looked like.

It took them about fifteen minutes of class time to write their prompts. We had already spent time developing discussion questions so they were prepared for this similar task. I created a Google Form for them to submit their questions. Once they were collected, I transferred them all to a shared Google Doc for them to see. They were allowed to use their own question or use another group’s. About half of them chose a question they had no part in creating.

Here’s a sampling of their questions:

There seems to be a lot of similarities between the characters of the first generation and the second. Compare and contrast the development of these two groups of characters.

Analyze the development of Heathcliff’s character throughout the course of the novel. Would he be considered a hero or a villain?

Throughout the novel, Catherine experiences multiple obstacles in her life. Describe these obstacles and evaluate how they are significant in regards to her relationships with others.

But I Don’t Teach Seniors. What Can I Do?

Other classes could certainly do it too, but they might need more support.

I would definitely give them some sample essay prompts that they can use as models. I might also give them some topics to write about, such as conflict, character motivation, and so forth. They might also do well with sentence stems like “List three ways that … ” Definitely have them in groups, and provide plenty of support as they write their questions.

However, it’s a strategy I’m going to use again. I was really pleased with the prompts that the students developed and while their papers weren’t any better than they would have been, they were more engaged in the process.