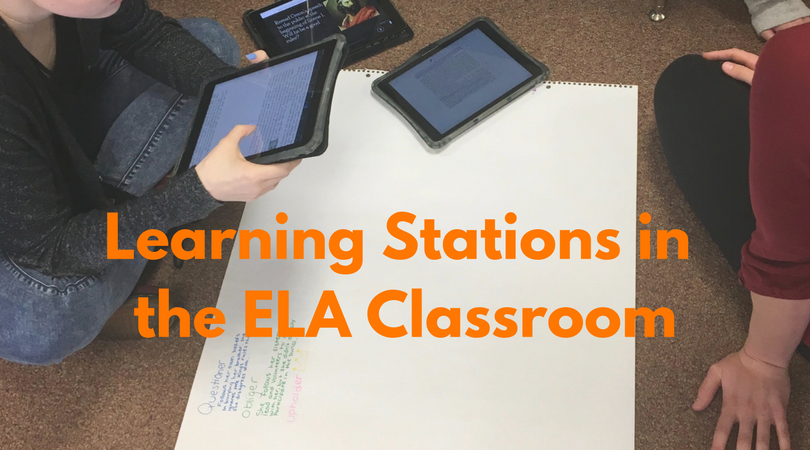 Learning stations are no longer just found in elementary classrooms. They are a sound instructional strategy that can be found in many secondary classrooms as well. They provide student choice and a variety of ways to demonstrate understanding. Plus, they can be a great way to build in time for conferencing, which is always tricky to incorporate into the day.

For those not familiar with learning stations, students rotate through stations to complete various tasks. these tasks can be virtual, although I like to use good old fashioned papers. In some cases they are used to differentiate instruction – grouping kids to work on skills where they might be deficient. However, in this post I’m going to focus on using learning stations at the end of a novel unit. If you have the basic concept of the stations but need some guidance on how to set up learning stations in your classroom, then this post is for you. Here are some guidelines I follow when I’m setting up stations.

Get the kids moving.

You want to keep kids moving around the classroom. Many studies have show that kids learn better when they are up and moving around. There are a couple of ways to manage this.

The first is to arrange desks in groups (or if you’re lucky you already have tables in your room). Sometimes I will reserve space in the media center where they have tables for them to use. This works best if you don’t have kids working in assigned groups. With this strategy students rotate from table to table collaborating with whomever else happens to be there if they’d like.

Another option is the one that I use most often-I let them choose their own groups and allow them to find space to work either by sitting on the floor (a popular choice) or by arranging desks to create a workspace.

I like to post activities around the classroom on the walls, usually using QR Codes that linked to the task. One time I made the mistake of putting the activities around the room with text big enough that the kids could read it from where they were sitting and they didn’t have to get up. I like the hum of activity that you get when kids are moving around. 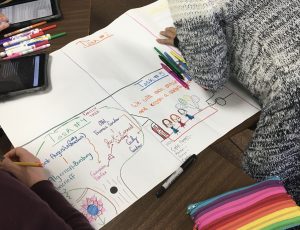 So you want to end your novel study with stations. So now what? It can be a challenge coming up with different activities to do that are meaningful. I generally try to have five activities that can be completed in any order – this helps manage group size in a class of 25-30. So here are the stations that I always include:

A station that gets them opening their books.

You can point them to a specific passage to analyze – something that would be too long to give them as a handout. I had my students examining Haimon and Creon’s argument in Antigone to find examples of their views on family and obedience. I also had them looking for examples of ethos, pathos, and logos in those speeches. When we read The Importance Of Being Earnest they reread the final appearance of Lady Bracknell to analyze the use of satire. This is a also great time to look at theme: pick a passage of have the students demonstrate how that passage illustrates the them of _______ in the novel or play.

A station that has them annotating.

This would be with a passage that is short enough to put on a handout for them to annotate so they don’t have to open their books. I might have them looking for the use of specific literary devices or analyzing tone. With Antigone I have them look at Antigone’s final speech to determine how she feels about her fate through analyzing word choice. With Othello I have them looking at Othello’s final speech to determine what he is trying to accomplish before he dies. At other times, though, it might be a passage from the novel that we didn’t spend any time on that I think is still worthy of study. No matter how long I spend on Pride and Prejudice there’s always something that falls by the wayside, and I can use this as an opportunity to cover it.

A station with a real world connection.

This would be an article or video that connects to the work in some way. I use news articles on dating an relationships with Pride and Prejudice and articles about people who have married against their parents’ wishes with Romeo and Juliet. I don’t teach Oedipus Rex anymore, but when I did I had a station on the Oedipal complex. This gets them thinking about how the text relates to their lives and explores topics that continue to be relevant.

A station with something creative.

We don’t do allow students to express themselves creatively enough anymore, so a creative activity is a must. I have a decent amount of standbys for this. They might write a summary of the novel or play as a limerick. I have also had them create a gingerbread man for a character in the novel: they create a recipe for the character that includes character traits instead of sugar and flour, complete with a recipe for how to make it. With The Importance of Being Earnest I have them create one of Cecily’s diary entries that capture her fictional relationship with Ernest.

A station with a video.

To meet the needs of diverse learners I always try to include a video as well. We are a 1:1 school where everyone has iPads, so this is pretty easy for me to do (although YouTube is blocked.) Before every student had an iPad, I was able to obtain a couple of laptops for this or used a bank of computers in the media center. I put this one last as an option because it can be difficult to manage depending on the circumstances.

However, there are some good options here, especially if you have them watching a film clip of a play that you’ve read. With any Shakespeare play there are bound to be wildly different interpretations out there: have students comment on the directorial choices made and whether it enhances the play or not (I’ve done this with virtually every play I’ve taught, actually.) You can do this with novels as well. You also might find a video that provides good context.

If you feel the need to and can away with letting the students work at the stations without being monitored, have a station where you conference with kids. Call them up in groups based on whatever criteria you choose.  Maybe based on closing some gaps in skills or just randomly to go over certain skills in small groups. Usually while we’re doing the learning stations we are also working on essays as well. This makes it a good time to go over mini-lessons or proofread thesis statements. Most of the time the students are able to work on the stations with minimal questions, so take advantage of the time to conference. 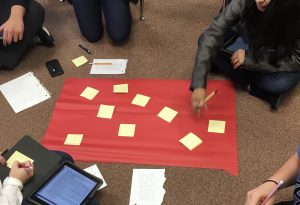 Do you need one more station or can’t think of anything to do for one of these categories? You can always double up on one of them. I have also had a station with simple review questions. To make it fun I put them on index cards face down on a table. They have them pick three of them (this works well if you are doing something that deals with fate. Tell them they are not allowed to pick cards other than the first three they chose or by avoiding their fate they will suffer some consequence.)

Sometimes I get a group that’s too task oriented and subdivide the labor. With some activities I don’t mind that they do this. But generally I’m assuming that they will be collaborating on the tasks. Make sure that students know going in that they should work together.

In some cases, I will give them the option of choosing a certain number of tasks to complete instead of requiring them to do them all. Not only does that give them more choice, but it allows them to spend more time on something that they are really into. I don’t want to disrupt them if they are having a really good conversation about something!